​FPIK, SEMARANG – A series of activities at the 34th National Student Scientific Week (PIMNAS) in 2021 which was held from October 25 to October 29, 2021 by the Ministry of Education, Culture, Research, and Technology (Kemendikbudristek) has reached its peak. The closing ceremony of the 34th PIMNAS was held offline at the University of North Sumatra (USU) and also online through the USU Youtube channel, Friday (29/10) night. A total of 37 PKM contingents from Universitas Diponegoro (UNDIP) managed to place UNDIP in the top 10, to be precise, they were ranked 8th nationally, up three places from the previous year.

Vice Chancellor I for Academic and Student Affairs, Prof. Budi Setiyono, S.Sos., M.Pol.Admin., Ph.D., expressed his pride and gratitude for the struggles that have been given to the 34th PIMNAS activity. “I, as Vice Chancellor 1 for Academic and Student Affairs, would like to thank you for all the struggles that you have done. Keep the spirit of the Young Diponegoro, “said Prof. Budi. In addition, Prof. Budi said that the University would appreciate all the contingents who qualified for the 34th PIMNAS final. “So we still appreciate your struggle, as participants who pass PIMNAS, the University provides academic and non-academic rewards,” he explained.

“Congratulations to those who got medals, your struggle was extraordinary, hopefully it will be a useful historical nick for you. And I congratulate those of you who haven’t gotten a medal, there is still a chance for PIMNAS next year,” added Prof. Budi. 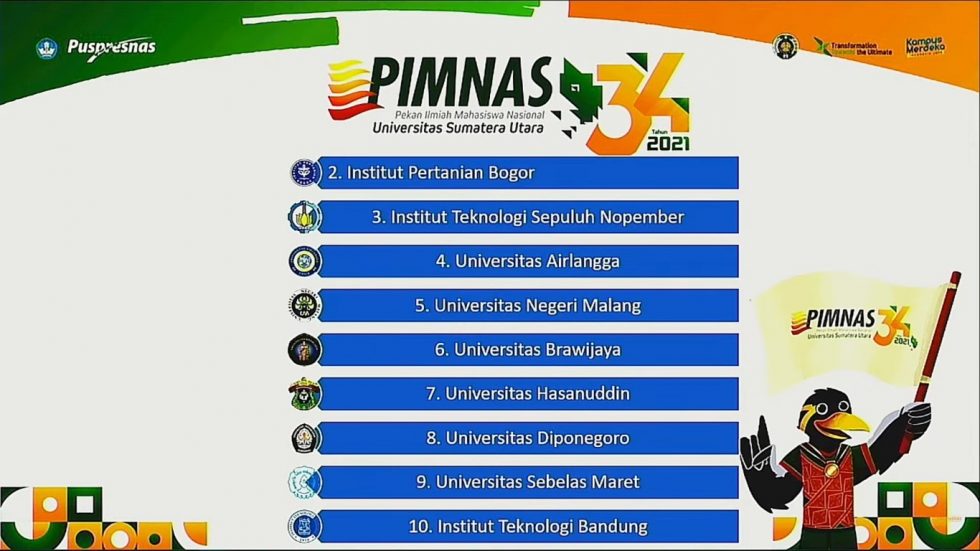 In the annual national-scale scientific event, the Undip PKM contingent managed to win 10 medals. With details of the medals for the presentation category as many as 6 medals consisting of 1 gold, 1 silver, and 4 bronze. While the 4 medals for the poster category were divided into 3 gold and 1 bronze.

The following is a list of medal winners achieved by the Undip PKM contingent in the 34th PIMNAS:

In the final of the 34th PIMNAS, Universitas Gadjah Mada (UGM) came out as the General Champion. Followed by the Bogor Agricultural University (IPB) in the second position, and the Sepuluh Nopember Institute of Technology (ITS) in the third position. The 34th PIMNAS is a prestigious national-level student scientific competition held annually by the Ministry of Education and Culture. In this year’s implementation, the 34th PIMNAS was attended by 3,126 students who were members of 735 teams from 108 universities throughout Indonesia. (Source: undip.ac.id | Tim humas UNDIP).